History of The Dingle Peninsula

The first known evidence  circa 4000BC of human habitation of the Dingle peninsula is at Ferriter’s Cove, near Ballyferriter, on the Dingle Peninsula. These were small groups who used local resources to form settlements and this continued for hundreds of years right up until the latter part of the  Middle Stone Age, 8000-4000 BCE. Evidence was uncovered  of a wide range of foraged food uncovered in this site including fish, deer, pigs and hare. The first people to farm the land, build homes and tombs arrive In the period 4000 – 2500 BC. In this period in our history tombs built of stone are introduced to house the dead.

History moves on again and we begin the Bronze age and a magnificent example of human inhabitation of the peninsula at this time can be found in the Loch a Duin valley near Cloghane.  In this valley alone there are 90 stone structues dating from 2500 BC up to modern times. They run like a web throughout the landscape are several miles of stone walling, hidden by peat which has accumulated over the past 3,000 years. From archaeological excavations and pollen studies, it has become clear that the Loch a’-Dúin Valley was used for intensive agriculture, both pastoral and arable, from 1600 BC to the beginning of the Iron Age. During this time habitation huts, fulachta fiadh (also known as burnt mounds), standing stones and enclosures were erected to house both humans and animals. It is during modern turf cutting that the ancient remains are uncovered. The peat preserves all organic materials to a remarkable degree. Birch wood found during the excavation of a section of pre-bog wall was preserved perfectly. The bog also holds all of the pollen which was released from the vegetation over the past several thousand years, enabling the botanist to discover what grew in the valley in the past.

The Loch a’-Dúin Valley today has been marked out with a walking route and is accessible to walkers of all abilities.

Examples of Bronze Age sites on the peninsula: Rock Art at Aghacarrible, Standing stone in the garden of Milestone House, Milltown.

One of the most dramatic sites on the peninsula may also date to this period. Overlooking the village of Camp, the gateway to the peninsula, one will find Cathair Con Rí, certainly one of the finest inland promontory forts in the country. Its high wall marks the boundary to the barony of Corca Dhuibhne. What was its use? Was it defensive, territorial, or occupied on a more full-time basis? Nobody knows its true purpose; but it is certainly one of the most rewarding walks on the Dingle Peninsula. 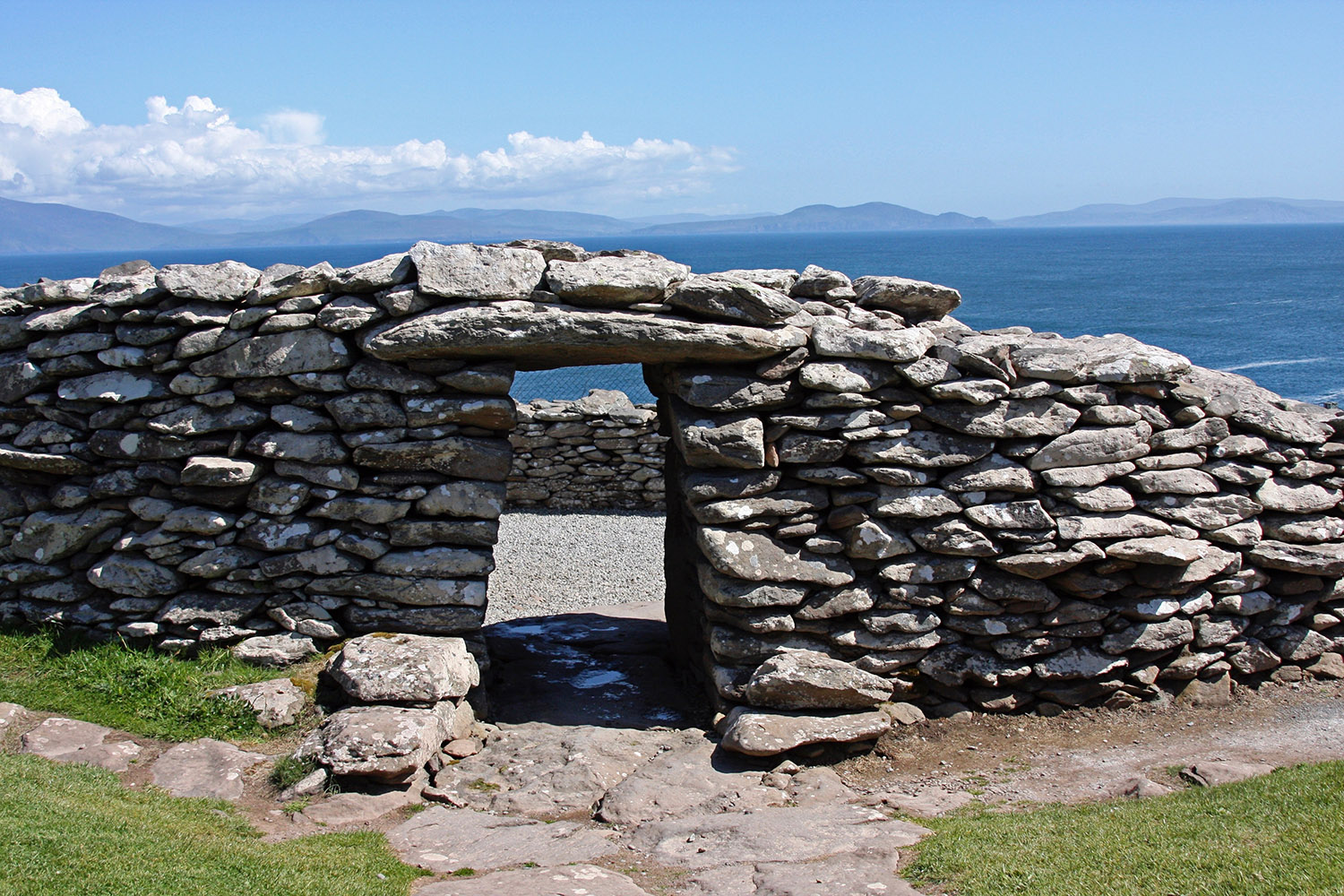 The promontory fort of An Dún Beag, at Fáhan, unfortunately now severely eroded by the sea, did provide an Iron Age date when excavated, although much of what is to be seen today at the site belongs to the Early Medieval period.

We are particularly fortunate on the Dingle Peninsula in that there is a very good survival of early monastic remains. Over 30 monastic sites survive, with a variety of remains such as churches, cross slabs, holy wells, beehive huts, shrines, burials, sun dials, ogham stones and enclosing features. , An Riasc, near Ballyferriter, has been excavated is a must see when visiting the peninsula. It was from such sites of education, from the 6th century onwards, that Irish monks travelled throughout Europe converting people to Christianity. It is during this period that the finest art works such as the Book of Kells and the Ardagh Chalice, were produced.

The Church in Ireland during this period was not under the direct rule of Rome, and thus retained many of the early Pre-Christian influences.

Dingle was an important trading port during the 16th century with merchant ships trading wine and other goods with ports in France, Spain and Britain. Spanish merchants were said to have lived in Dingle and some of the buildings were built in the Spanish fashion. The King of Spain, Charles V sent a personal envoy to Dingle in 1529 to communicate with the Earl of Desmond, resulting in The Treaty of Dingle.

By the 15th century the sea journey between the south coast of Ireland and the Iberian coast took 5 – 10 days with favourable winds/weather. Dingle was an embarkation point for pilgrimages to Santiago De Compostela in Galicia in north-western Spain.

The 1st Desmond Rebellion was led by James Fitzmaurice Fitzgerald and the Rebellion of 1579 -1583 was led by Gerald Earl of Desmond. These men headed an old Anglo-Norman Catholic family and could be considered the equivalent of ‘princes’ of the province of Munster controlling much of the area.

In 1579 James Fitzmaurice Fitzgerald was declared a traitor by the crown of England and from then became a hunted man. He sought help from the Catholic courts of France and Spain and from the Pope against the Protestant Queen Elizabeth. In July 1579 Fitzmaurice Fitzgerald arrived in Dingle harbour with a Spanish expeditionary force. He came ashore and was ambushed and killed shortly afterwards. The ships left Dingle after a few days and sailed to Smerwick harbour where they set up camp at Dún an Óir, which can still be visited today. They stayed here for over a year and were joined by Italian and Irish reinforcements. During this year The Black Earl (Earl of Ormond) raided the Dingle Peninsula in 1580 to ensure that no locals would help the invaders at Dún an Óir. Here they were massacred by English forces under Earl Grey de Wilton. Following the death of Gerald Earl of Desmond in 1583 there was confiscation and redistribution of Desmond’s lands.

Subdivision of land-holdings was a progressive feature of rural Ireland since the mid eighteenth century and most were tenant farmers paying rent to landlords.  The gradual replacement of a cereal and dairy-based diet by potatoes, ( one variety in particular, the Irish Lumper) facilitated a surge in population from 6.8 million in 1821 to 8.4 million in 1841.

By 1845 one third of all tilled land in Ireland was given to potato cultivation. Living conditions for most of the population became increasingly difficult with oppressive rents and bad housing. With the onset of a fungus like organism Phytophthora Infestans ( commonly known as potato blight) in 1845. This blight spread rapidly throughout the country and up to one half of the potato crop was ruined in 1845 and for several years afterwards. With many tenant farmers unable to produce sufficient food for their own needs, and the cost of supplies rising, thousands died from starvation or from disease caused by malnutrition.

To address the poverty the British government enacted the Poor Law Act in 1838 , “No individual capable of exertion must ever be permitted to be idle in a workhouse”

which divided Ireland into 130 poor law unions, each to have a workhouse that was administered by a Board of Guardians.

The workhouse system in operation from 1840 onwards was unable to deal with the awful need created by the Famine from 1845. As the numbers going into the workhouses increased the system became overwhelmed – workhouses designed to hold a few hundred people were forced to hold thousands. In March 1847 130 workhouses were filled to capacity with 115,000 people; by 1851 these same buildings held 217,000. The Soup Kitchen Act was passed in 1847  to provide food for people who could not get into the workhouses because there was simply no room for them 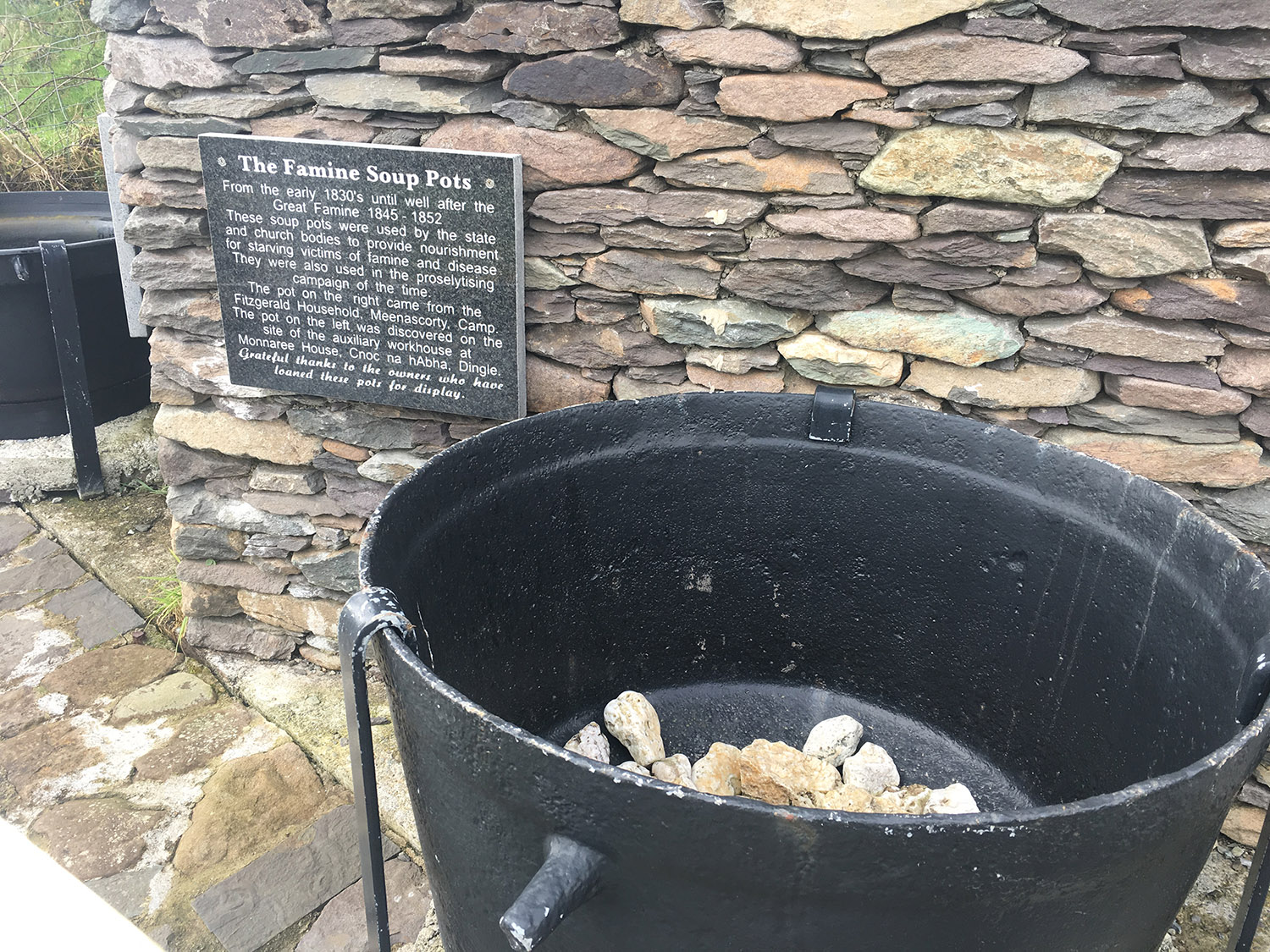 Dingle Workhouse was the last one built in Kerry, opening in 1850.  It was proposed that it would have accommodation for 700 inmates but by 1851 it had 1281 inmates

Conditions within the workhouse were designed by the 1838 Poor Law Act such that the inmates should be “worse fed, worse clothed and worse lodged than the independent laborers of the district.”  The men had to break stones, or work on the land attached to the workhouse with the women at house duties, mending clothes, washing, attending the children and the sick.

Death was part of life in the workhouse and burial grounds were opened nearby to deal with the large number of corpses. Ireland’s population fell by 20% and Kerry’s by 19% between 1841 and 1851.  It is estimated that as many as 1 million Irish, men, women and children died during the famine and that a further million emigrated to escape poverty and starvation.